Home » Skip's Blog » There And Back Again 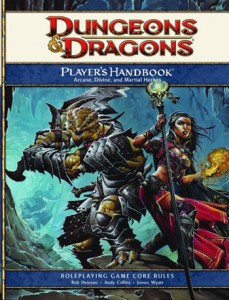 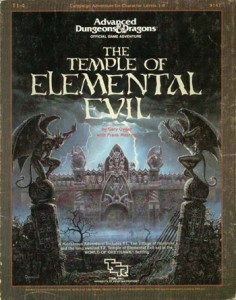 At some point I heard that Wizards had released 4e versions of Village of Hommlet and Tomb of Horrors to people who DM’d D&D Encounters.  Wanted to try my hand at these old modules I picked them up on eBay.  Village of Hommlet looked great, but where was the Temple of Elemental Evil conversion that should follow after?

So, why not 3e?  I really love 3e and 3.5e.  Look in the 3e PHB and you’ll find my name in the list of playtesters.  My group was the only “virtual” playtest group allowed during the 3e testing, and it’s great to see our imprint on that product in specific areas like critical hits and multi-classing.  I also met Dave Cline (creator of Alden Minor, and DM of the Hammers of Justice campaign) at a 3e demo that I ran.

At the end of the day, my group had decided that they wanted to play the old classic modules we never got to play while growing up.  Running a 3e campaign would mean needing to convert everything into 3e, something I don’t have time to do. 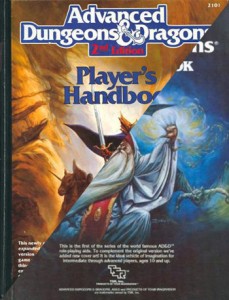 Additionally, there is a wealth of 1e/2e info already out there in the form of modules, books and a surprisingly vibrate online OD&D / AD&D community.  Many books are also readily available for relatively cheap on Amazon.com and eBay.

I have a stack of “classic” AD&D modules that I never sold, along with my core books and Dragon Magazine Archive CD-ROMs.  After picking up sets of the Encyclopedia Magica, Priest’s Spell Compendium and Wizards Spell Compendium, I don’t think I’ll ever need to buy another D&D book.  Conversely with 4e, I was still purchasing new books and paying for a yearly DDI subscription.

So, after marching along with TSR/Wizards for the last 20 years of AD&D development, I’ve decided to take a time warp back to where it began.  For as broken as AD&D ever was, it has a charm that I still yearn for.  And besides, I’ve got a stack of classic adventures I’ve yet to experience…

THAC0 Really Was Stupid Bypassing Half a Module
Subscribe RSS